WTT Announces Schedule, Tickets On Sale For 2020 Season At The Greenbrier, July 12-Aug. 2 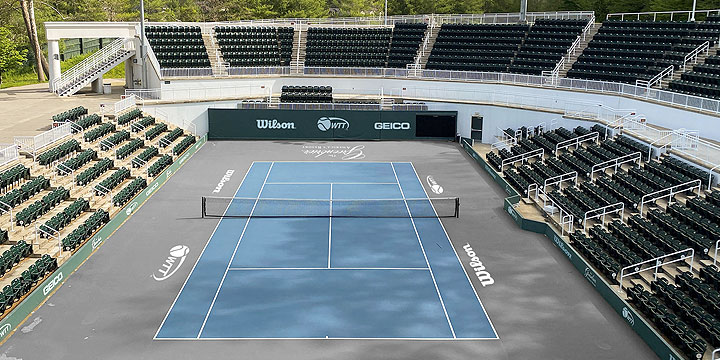 WTT’s Nine Teams – Including New Chicago Franchise – Will Contest 66 Matches Over 22 Days; Up to 500 Fans for Outdoor Matches and 250 If Matches Are Moved Indoors Due to Weather

The 2020 World TeamTennis season schedule has been set, and tickets will go on sale for all matches tomorrow/Friday, June 12, in advance of the 45th WTT season to be played entirely at The Greenbrier “America’s Resort” in White Sulphur Springs, W.V., July 12-Aug. 2.

To purchase tickets, fans can visit WTTTickets.com. Tickets start at $40 for Upper Bowl seats at The Greenbrier’s outdoor Center Court at Creekside Stadium and prices vary depending on the day of the week. All seating is general admission with Lower Bowl and Front Row seats also on sale. Weekend packages, season tickets and WTT Semifinals and Final tickets will be available for purchase on Friday at 10 a.m. ET/7 a.m. PT.

All Lower Bowl and Front Row are VIP tickets which include:

Upgraded VIP ticket options also include the chance to take part in exclusive clinics put on by select WTT players. For more information on the clinics, go to: WTTTickets.com.

World TeamTennis’ schedule will include at least three matches per day at The Greenbrier’s 2,500-seat outdoor Center Court at Creekside Stadium. In accordance with state health guidelines, WTT will allow up to 500 fans (20% capacity) to attend its outdoor matches. An indoor court, with a fan capacity of 250, will be used in case of rain with priority given to fans with Lower Bowl tickets. An Upper Bowl ticket does not guarantee access to the indoor facility should matches be moved indoors. In the event of an outdoor stadium rainout, an Upper Bowl ticket will be refunded or fans will have the option to attend on a different day. 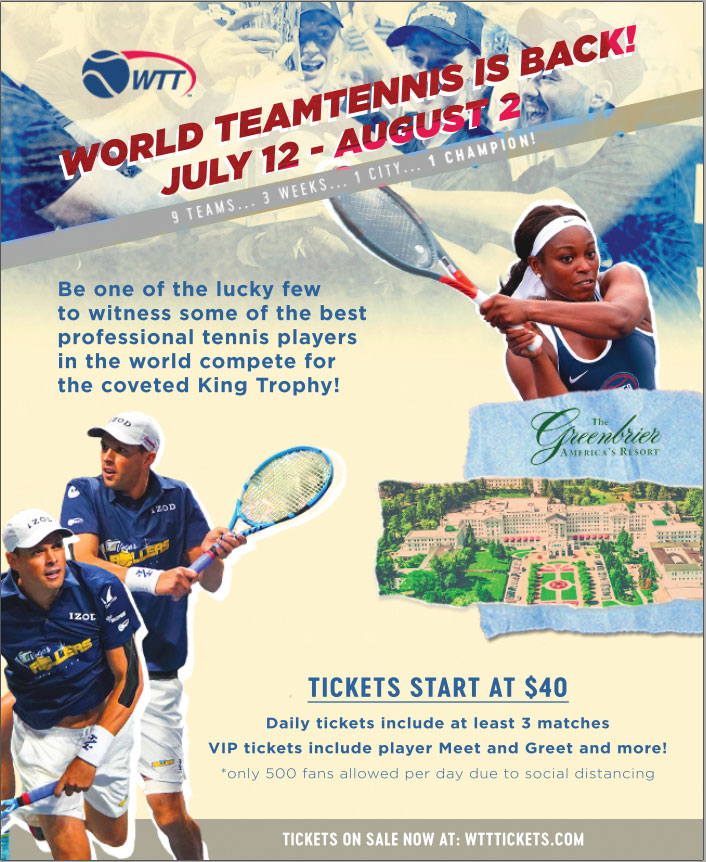 The two-time defending WTT champion Springfield Lasers will kick-off the season on Sunday, July 12, against the Orlando Storm at 12 p.m. ET. That will be followed by WTT’s newest expansion franchise, the Chicago Smash, taking on the Vegas Rollers at 4 p.m. ET. Southern California rivals San Diego Aviators and Orange County Breakers square off in the evening match, at 8 p.m. ET. Match times will vary daily, with 9 a.m. ET the earliest start time, and 9 p.m. ET the latest a match will begin.

The entire league schedule can be viewed HERE.

“Our players, coaches and staff are excited to bring tennis back to the fans when we hit the court on July 12 to start the 2020 World TeamTennis season,” said WTT CEO Carlos Silva. “It’s going to be an extremely exciting year with all of our players competing for the full three-week season at The Greenbrier. We’ll see if the Springfield Lasers can complete a three-peat or if one of the other eight WTT teams will be hoisting the King Trophy on Aug. 2.”

All of WTT’s 2020 regular season and playoff matches will be televised on CBS, CBS Sports Network, Tennis Channel or the ESPN family of networks. In addition, select matches will be live-streamed on ESPN+, Facebook Watch or WTT.com. World TeamTennis’ complete season broadcast schedule will be announced on WTT.com at a later date.

Safety guidelines have been put into place by World TeamTennis with guidance of local and state government officials in West Virginia and an adherence to all health and safety protocols set forth by the Center for Disease Control (CDC) due to the ongoing COVID-19 pandemic. Every fan at The Greenbrier will be required to pass a temperature check of 100.4 degrees before entering the grounds. All fans will be checked a second time before entering the outdoor stadium, Center Court at Creekside, or indoor court for any matches and will be denied entry should they fail the temperature check.