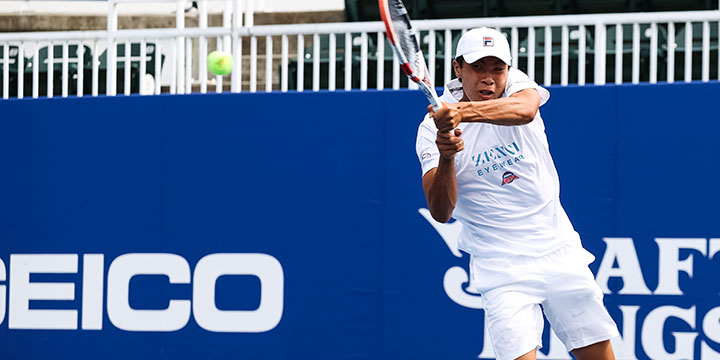 When Chicago Smash coach Kamau Murray revealed his lineup for the team’s debut in World Team Tennis a day before Sunday’s match against the Vegas Rollers, 18-year-old Brandon Nakashima saw he would be teaming with Rajeev Ram to face the most successful duo in tennis history, Mike Bryan and Bob Bryan.

“I definitely was excited,” Nakashima said.

:: CHICAGO SMASH vs. VEGAS ROLLERS MATCH STATS ::
Making his WTT debut as well, Nakashima parlayed his excitement into motivation to help lead the expansion Smash past Vegas 24-18 in both teams’ season opener at The Greenbrier.

Though the former ACC Player of the Year from the University of Virginia admitted he was nervous to start, he never showed signs of duress while knocking off WTT-veteran Sam Querrey in men’s singles to open the match, or while teaming with Ram in the finale against the Bryans.

“I just tried to stay solid on my side of the court and just tried to have fun out there and get a feel for the situation and environment,” said Nakashima, who reached as high as No. 4 in the world as a junior. “Once I got the first couple of games under my belt I kind of loosened up a little bit.”

Nakashima gave the Smash (1-0) its first set victory when he overcame Querrey’s dominating opening game and held serve for a 5-3 win in men’s singles. He displayed plenty of calm and reserve after Querrey won 11 straight service points. Nakashima broke Querrey’s serve in the seventh game when the Rollers’ veteran double-faulted on the deciding point. The 220th-ranked player on the ATP tour then took the final game with a shutout for the win.

“He’s a stud,” Murray said. “When he came available and was interested in playing World Team Tennis, regardless of what other singles players were available, we drafted him. He was my No. 1 pick for this whole team. I wouldn’t say I’m impressed with the way he handled it, it’s just sort of what we expected.”

But Nakashima served first, and once again looked like a seasoned veteran in helping the Smash seal the win.

“I was really excited to play and it was really a great experience to win that first match for our team,” Nakashima said. “I’m probably the youngest one out here. All these players are so good and so mature. It definitely feels great to be out here with these guys.”

In what might have been the most anticipated matchup, 2017 US Open champion Sloane Stephens faced Rio Olympic gold medalist Monica Puig in women’s singles. But Stephens was dominating from the start, opening a 3-0 lead after breaking Puig’s serve twice. Puig got on the board by breaking Stephens’ serve in the fourth game but couldn’t sustain momentum and continued to struggle to win her service points. Stephens won the last two games and broke Puig’s serve all three times in the match.

Ram and Bethanie Mattek-Sands went the distance with Vegas’ Asia Muhammad and Mike Bryan in mixed doubles, as both teams held serve to a 4-4 deadlock, leading to a set-tiebreak. Mattek-Sands and Ram did a good job during the tiebreak down the stretch, breaking the Vegas duo once and closing out the set by winning three of the final four points.

Muhammad and Kristie Ahn gave Vegas its first set win of the season with a tight victory in women’s doubles over Mattek-Sands and Eugenie Bouchard. The Vegas duo stormed out to a 3-0 lead and brought the Rollers within four points overall, at 15-11. Ahn, playing in her first WTT match, carved out angles and capitalized with precision shots in tight creases while frustrating Chicago’s tandem.

But just as momentum was seemingly in Vegas’ favor, Mattek-Sands and Bouchard were able to adjust by tweaking their positioning and ruin the shots Ahn was making while stifling Vegas’ run. The Smash duo broke serve in the fourth game and rattled off four consecutive games to take a 4-3 lead. Muhammad and Ahn responded to force the deciding game and won the set 5-4 and handed the momentum to the Bryan brothers for the final set.

“I was a little surprised at how well they played,” Vegas coach Tim Blenkiron said. “They’re a new team, and I think one of our strengths is our chemistry. It plays a big part as the season goes on. You don’t take much out of the first couple of matches. It’s a long season, that’s what we learned last year.”

Murray, on the other hand, loves the makeup of his team and feels the chemistry was built when he put the team together and is ready to carry momentum into the next match.

“Three Grand Slam champions on this team and a Grand Slam finalist in Genie, I think we have an experienced team that can kind of adapt to a lot of situations,” Murray said. “When we put this team together, we put people together we knew had a relationship already and would gel well. All the personalities on the team are great team people. They don’t want to let their team down; they don’t want to disappoint and they’re willing to give a little bit of themselves for the entire team.”

Vegas will face the Orlando Storm on Monday at 1 pm ET/10 am PT, with the match being broadcast on ESPN2. The Smash return to action Tuesday at 3 pm ET/Noon PT against the Storm, also on ESPN2.

Willie Ramirez has covered the Vegas Rollers since their inaugural season. He is a 33-year veteran covering sports in Southern Nevada, and resident of 47 years. He is a freelance reporter in Las Vegas and the Southern Nevada correspondent for The Associated Press. Follow him on Twitter at @WillieGRamirez.