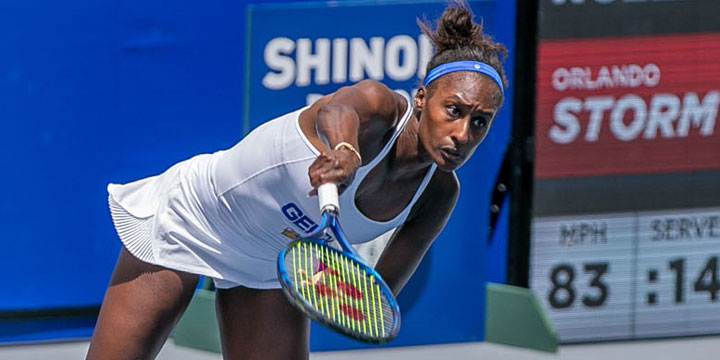 The Orlando Storm dropped eight of the final nine games against the Vegas Rollers on Monday en route to their first loss of the 2020 season, 24-15.

The match was nip and tuck into women’s doubles, the fourth set of the day. After Orlando’s Jessica Pegula and Darija Jurak held serve at love to gain a 3-2 lead in the set and close their overall deficit to 16-14, the Rollers’ Asia Muhammad and Kristie Ahn took control by winning the next three games and ultimately the set, 5-3.

“She makes it easy; she just rips,” Muhammad said about playing with Ahn. “… Kristie and I go way back. We’re really good friends, and that makes it easy because we’ve never played together, but we have chemistry off the court. I’m glad it’s on the court, too.”
VEGAS ROLLERS vs. ORLANDO STORM MATCH STATS
With the Storm already having little margin for error, trailing 19-14, the Rollers brought in Mike Bryan and Bob Bryan to put on the finishing touches. The legendary doubles duo made quick work of Tennys Sandgren and James Ward, dispatching them in just 20 minutes, 5-1.

Much like in their season-opening victory Sunday, the Storm (1-1) grabbed an early lead thanks to Sandgren in men’s singles action. However, up 2-1, Sandren couldn’t take advantage of a trio of break points against Sam Querrey, who unleashed three consecutive aces to help him remain on serve. That contributed to the set eventually culminating with the final point of a nine-point tiebreaker, where Sandgren, playing deep behind the baseline, returned everything thrown his way until Querrey faltered with a forehand into the net.

But that 5-4 (4) win would be the only set to go in Orlando’s favor. Monica Puig got past Danielle Collins in women’s singles, 5-3. Although it was nice to see Collins back on the court after she felt too ill to play on Sunday, the 26-year old American had to fight uphill all set long versus the 2016 Olympic gold medalist. When she was already down 0-2, Collins battled back from love-40 to get on the board in the third game. Collins had a crucial break point while trailing 3-4, but Puig evened matters up with an ace and clinched the set for the Rollers (1-1) with an overhead smash at the net.

The middle set, mixed doubles, was probably the most aesthetically pleasing one of the afternoon. Muhammad and Mike Bryan prevailed over Sandgren and Jurak, 5-3, but each side went all out to sustain points and engaged in long volleys. With the Storm serving at 3-3 and 15-30, Sandgren pulled out all the tricks at the net to fend off Bryan and Muhammad’s shots, including a small backhanded drop shot complete a full pirouette. But Bryan kept that point alive with a stroke down the line, which Jurak couldn’t counter with her running forehand attempt. The Rollers captured the break point in that game, and Muhammad ended the set with an ace at love.

“I’ve been playing a lot of volley games with some friends at home, which I was pumped about because it’s obviously going to help me here,” Muhammad said about how she has been working on her game over the past few months. “I knew I was going to be playing a lot of doubles and mixed.”

— Muhammad, who is among the top 50 doubles players in the current WTA rankings, had a first-serve percentage of at least 73% in each of her two doubles sets Monday. She won 11 of her 16 first-serve points (69%) while her opponents — Jurak, Pegula and Sandgren — combined to win just 15 of 29 such points (52%).

— Although Puig was just 2-for-9 in break points in her victory over Collins, the Storm’s top women’s singles player will rue the chances she had to change the outcome. Collins converted only one of four break points and came up short despite Puig committing a full game’s worth of double faults (four). Conversely, Collins had just one double fault.

— This result was Orlando’s second-most lopsided defeat in the short, two-year history of its franchise. The Storm lost a home match to the San Diego Aviators last July, 25-15.

The Storm will be back on the court Tuesday to take on the Chicago Smash, who prevailed in their first WTT match Sunday against the Rollers. The expansion Smash prevailed 24-18 and never looked back after winning 10 of the match’s first 14 games. That included a 5-1 triumph for Sloane Stephens over Puig. First ball between the Storm and the Smash will be served up at 3 p.m. ET on ESPN 2.

Brian Murphy is a writer based out of Orlando. He covers UCF athletics for a number of Orlando-based publications.
You can follow him on Twitter @Spokes_Murphy.