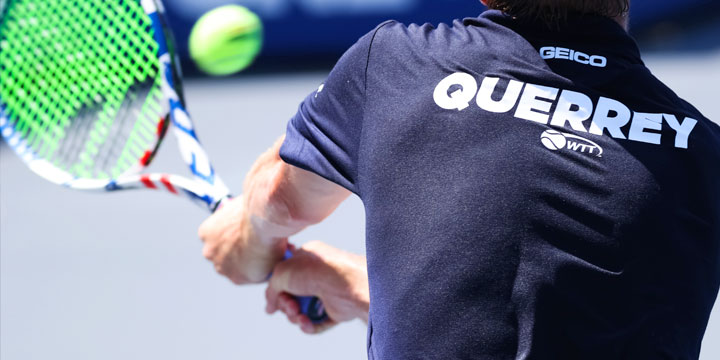 Querrey may want to excuse his wife and son from the stands for the remainder of the three-week season, as he dominated San Diego’s Ryan Harrison in men’s singles to set the tone and help the Rollers to a 23-21 win in Extended Play.

“I’m glad I actually got to help the team today,” Querrey said. “I was happy to give us a lead today, unlike the first two days. It was fun to be out there. Hopefully, it’ll just keep getting better and better, I can find more of a rhythm, be more aggressive and just keep getting points for my team.”

It was the second time in three days the Rollers (2-1) went into Extended Play, as San Diego (1-1) forced extra time when Harrison and Jonny O’Mara beat Mike Bryan and Bob Bryan in men’s doubles in the final set.

But it was Querrey who came out fired up by responding to back-to-back losses in his first two appearances on Sunday and Monday, against Chicago and Orlando, respectively. The 32-year-old had added motivation in his showdown with Harrison, who won both of last year’s meetings between the hard hitters.

After both held serve in the first two games, Querrey went to work.

The 2017 Wimbledon semifinalist closed out the set by winning the last four games, breaking Harrison twice. Querrey, who has been ranked as high as No. 11 in the world in 2018, finished with five aces in the set and finished a perfect 6-for-6 in winning first-serve points, while he was a stellar 6 of 8 with second-serve points.

“I just started off clean,” said Querrey, who was named the Player of the Match. “I had a good hold and then even though he held his first service game I still felt good and then just kind of got in a good rhythm and made him work for his service game. In the end, I got lucky, he double-faulted twice to give me a few more break points to close it out.”

The match wouldn’t end without drama, though, as Harrison and O’Mara refused to buckle against the world’s most successful men’s tennis tandem, the Bryan brothers.

With the Aviators up 40-0 in their first serve of the final set, the Bryan brothers showed their prowess by storming back to break Harrison’s serve and go up 2-0. But when O’Mara found the alley on the deciding point of the third game to get the set back on serve and make it 2-1, Harrison was able to serve the duo a second-straight game to knot the set. The teams traded the final four games and went to a fourth-straight set-tiebreak in the match.

O’Mara found a crease for a huge blast to go up 3-2 in the tiebreak for momentum, and Mike Bryan‘s deep lob landed just outside the baseline to give the Aviators the set and force extended play. After the Aviators took the first game, the Bryans overpowered their foes and sealed the match for the Rollers.

Monica Puig and Christina McHale went the distance in women’s singles, getting to the ninth point in the tiebreak. Four of the first six games saw the ladies break each other’s serve, twice each. After falling behind 3-1, Puig rattled off three straight wins. McHale scorched Puig in the eighth game with a shutout win to force the tiebreak. McHale carried the momentum into the extra play, and took an early 3-1 lead, but Puig answered with three straight points and four of the last five to nab the set.

Mixed doubles saw both teams hold serve throughout, as the set also went to a tiebreak. O’Mara and Nicole Melichar were able to outlast Vegas’ strong duo of Bob Bryan and Asia Muhammad, winning four of the last six of the tiebreak. O’Mara and Melichar combined to win 13 of 15 (.866) of their first-serve points.

In women’s doubles, Muhammad and childhood friend Kristie Ahn teamed up for a third-straight day and took on the skilled duo of Melichar and Coco Vandeweghe. After both tandems held serve to a 4-4 tie, San Diego’s duo was too much, as Melichar and Vandeweghe raced out to a 4-0 lead before taking the tiebreak 5-1. The win closed the gap overall, cutting Vegas’ lead to 18-15 heading into the final set.

After opening the season with three matches in as many days, Vegas will enjoy a day off Wednesday before returning to action Thursday. The Rollers have to feel good about its 2-1 start, after opening its inaugural season in 2019 on a 1-3 slide.

Vegas will face the Orange County Breakers on Thursday at 11 am ET/8 am PT, with the match being broadcast on ESPN-plus. The Smash return to action Wednesday at 7 pm ET/4 pm PT against the Washington Kastles, also on CBS Sports Network.

Willie Ramirez has covered the Vegas Rollers since their inaugural season. He is a 33-year veteran covering sports in Southern Nevada, and resident of 47 years. He is a freelance reporter in Las Vegas and the Southern Nevada correspondent for The Associated Press. Follow him on Twitter at @WillieGRamirez.