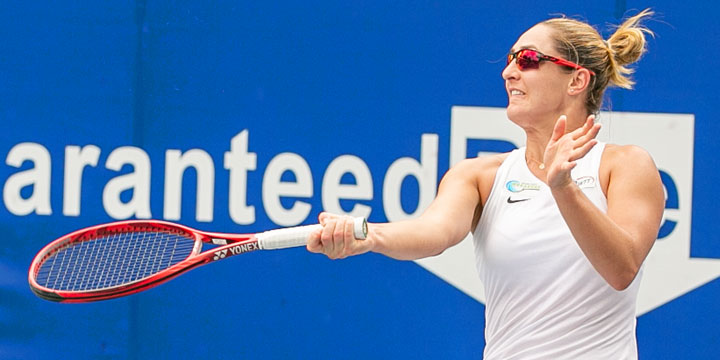 The Orange County Breakers snapped a five-match losing streak dating back to the 2019 season, winning all five sets in dominating fashion against the Vegas Rollers in an early morning tilt at The Greenbrier.

Steve Johnson and Sam Querrey are long-time friends, both having grown up in Southern California. They have practiced together countless times over the years and have also shared coaches at some instances in their careers.

VEGAS ROLLERS vs. OC BREAKERS MATCH STATS
Querrey holds a 3-0 head-to-head advantage at the ATP level, but it was Johnson who came out on top today in a closely contested set that saw no breaks of serve. The showdown came down to a deciding point on Querrey’s serve in the tiebreaker at 4-4, where Johnson ran around a second serve to hit a deep and heavy forehand to force an error from the Rollers star.

Gaby Dabrowski and Austin Krajicek got the call to join Orange County on Tuesday and the pair of free agent signings have already made a big impact. The duo got off to a quick start by building a 3-0 lead over Bob Bryan and Monica Puig that began with a break at love on Bryan’s serve.

The Rollers duo shifted the momentum however and reeled off four straight games to even up the overall match score at eight games. This sequence was a testament to just how quickly a match can flip with WTT’s fast-paced scoring format.

Dabrowski saved two set points in her service game at 3-4, before smashing an ace out wide in the tiebreaker at 4-3 to give the Breakers a second consecutive set by virtue of a tiebreaker.

“Austin served amazing so that made it easy for me at the net,” Dabrowski said. “We’re the underdogs, we have nothing to lose. Really proud of the way the team came out and handled the situation.”

Orange County had won just 2 of 15 sets across their first three matches and both of those sets had come from Luke Bambridge and Johnson in men’s doubles. Coach Rick Leach made a tactical change today and inserted 2011 NCAA doubles champion Krajicek to pair up with Johnson, the 2011 and 2012 NCAA singles champion.

The lineup change proved extremely fruitful as the former collegiate standouts took down Bob and Mike Bryan, the most decorated doubles duo in tennis history, 5-2 to extend Orange County’s lead to 15-10 heading into halftime.

After going with Jennifer Brady and Dabrowski in Wednesday’s match against the Chicago Smash, coach Leach made another successful lineup change by inserting Andreja Klepac to team up with fellow doubles star Dabrowski.

The Canadian-Slovenian duo put on a dominating performance to earn a 5-0 victory, winning 20 of 25 points in the set against the trio of Puig, Kristie Ahn, and Asia Muhammad. Puig subbed in for Muhammad at 0-2 in the set.

Brady entered the final set in great position, needing to protect a 20-10 lead and ensure she closes out the great team performance across the board.

Earning the crucial break at 4-3 against Puig, the 2016 Rio Olympics gold medalist, Brady consolidated the break with a hold at love for the 5-3 set win and the overall 25-13 victory.

The former UCLA standout did not face a single break point and won 11 of 12 first serve points en route to the victory.

Although the 5-2 men’s doubles set between the four former collegiate superstars may not look competitive due to the scoreline, it was just a few points that earned Krajicek and Johnson the win. The duo won all four second serve points on Mike and Bob’s serves, while converting the only break opportunity either team had in the set.

Orange County is the lone team in the league with a day off Friday but return to action against the Orlando Storm at noon ET Saturday, live on ESPN 2. The Rollers will look to get back on track Friday afternoon, facing the two-time defending champion Springfield Lasers at 3:30 p.m. ET live on ESPN+.

Orange County native Parsa Nemati is in his third season as a beat writer for the Breakers. Follow him on Twitter at @Parsa_Nemati for his coverage of junior, college, and pro tennis.