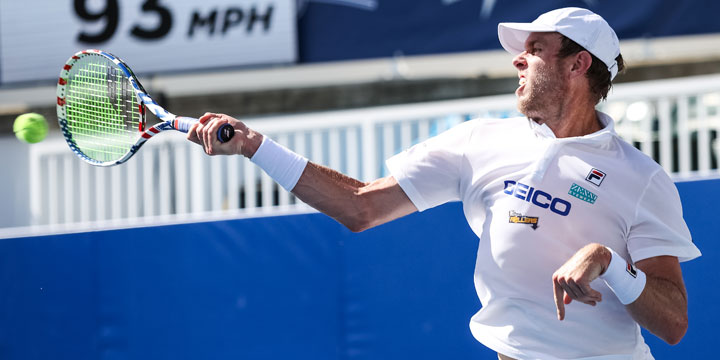 Sam Querrey’s smile was radiant in contrast to the shadow from his bucket hat and aviator shades. The Vegas singles specialist had plenty of reasons to smile after his Rollers held off the Springfield Lasers 20-18 in extended play at The Greenbrier.

VEGAS ROLLERS vs. SPRINGFIELD LASERS
“It’s always easy to get fired up against the Lasers,” Querrey said. “I’m not sure what it is, but I’ve disliked that team for like 10 years. Maybe it was because they’ve dominated in the past.”

This time it was Querry’s turn to dominate. He turned the match on its ear with a 5-1 win over Springfield’s Mitchell Krueger in men’s singles. Querrey broke his opponent’s serve twice, though Krueger had a chance to make things interesting late. Trailing 4-2, he put Querrey in a 15-40 hole, but Querrey rallied back thanks to his forehand and his serve. His sixth ace of the set, on deciding point, gave Vegas a 14-8 lead at halftime.

“The serve came up big in some crucial moments,” Querrey said. “I think I hit an ace on two deuce points and that’s huge in World TeamTennis.”

But Springfield rallied in the final two sets. Olga Govortsova got a big 5-3 win over Monica Puig in women’s singles to bring the Lasers to within 17-13 after four sets. Govortsova earned back-to-back breaks to secure the win, getting a little help from Puig along the way. She double faulted on set point to set up a thrilling final set.

Robert Lindstedt and Caty McNally won that set 5-2 to force extended play, but Puig — substituting for Kristie Ahn — held serve to push the Rollers to victory. Vegas is now 3-2 on the season. Springfield, the two-time defending champions, falls to 1-3.

“We were all fired up to get this one done,” Querrey said. “It made it more special that we did it in close fashion there at the end.”
Springfield took a thrilling opening set when Lindstedt and Rojer won three straight games, including a 9-point tiebreaker, to capture men’s doubles 5-4 (5-2). Lindstedt struggled early, serving a pair of double faults as Bob Bryan and Mike Bryan broke his serve. But the big Swede wasn’t rattled. He hit several winners in the final three games, nicking the line with the winning point to get the Lasers off to a winning start.

Vegas was solid in women’s doubles, the second set of the afternoon. Kristie Ahn and Monica Puig broke the Lasers twice to win the set 5-2. The Rollers built a 4-1 lead before Springfield got a big break of Puig, but Vegas turned right around and broke Govortsova to end the set and stake the Rollers to a 9-7 overall lead.

“We’re bonding. We’re all friends and we all get along,” Querrey said. “Our coach, Tim Blenkiron, we leave the lineup stuff to him. Whatever he throws out there, we’re OK with it, we’re ready to go and no one’s complaining. We’re all in it together and hopefully we can build on this momentum.”

How good was Querrey’s serve? He won 9 of 10 first serve points, led the way with six aces and had just a single double fault.

Vegas has the early game Saturday, facing the San Diego Aviators at 9 a.m. Eastern on CBS Sports Digital and Facebook Watch. The Lasers will play the nightcap, squaring off against the New York Empire at 7:30 on ESPN 2.