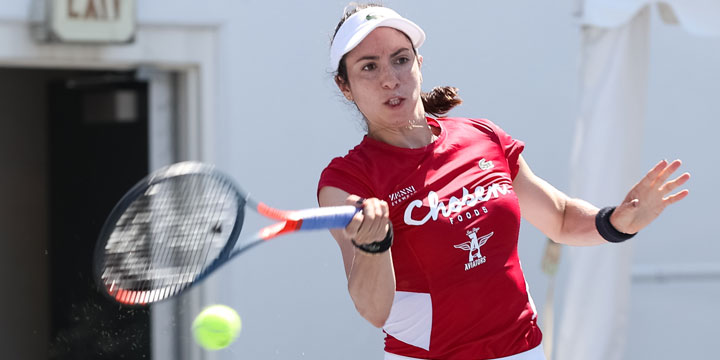 After Friday evening’s frustrating loss to the Orlando Storm in a Supertiebreaker, the San Diego Aviators dug deep and came back early Saturday morning to overcome the Vegas Rollers 20-15 in Extended Play and snap a three-game losing streak.

The Aviators, who improved to 2-3 on the season, did not return to their hotel until approximately 11:30 p.m. ET Friday night, but after an early morning wake-up call for Saturday’s 9 a.m.  ET match, San Diego arrived on court ready and determined to face the Rollers.

Coach John Lloyd of the Aviators juggled his line-up against the Rollers, who had won their previous head-to-head meeting earlier this season 23-21.

Jonny O’Mara teamed with CoCo Vandeweghe in mixed doubles to open the match against Mike Bryan and Kristi Ahn of the Rollers. Lloyd’s line-up strategy paid off as O’Mara and Vandeweghe responded with an impressive 5-2 victory over Bryan and Ahn.

In women’s singles, Christina McHale of the Aviators faced Ahn, who substituted for an injured Monica Puig in the third game of the set. The substitution made little difference as McHale dominated from start to finish, winning the set 5-1 in 24 minutes to extend the Aviators lead to 10-3.

#WTT2020: @GuaranteedRate Player of the Match @ChristinaMcHale sat down to chat with @OliviaDekker after a singles and doubles win! She discusses the Aviators quick turnaround from a late match to early morning, playing doubles with @CocoVandey, and more! pic.twitter.com/quuYUHusha

Bob Bryan and Mike Bryan closed the Aviators overall lead to 13-8 as they got past Ryan Harrison and O’Mara 5-3 in an entertaining men’s doubles set that took 27 minutes to complete.

Following halftime, Lloyd opted to pair McHale with Vandeweghe in women’s doubles against Ahn and Hailey Baptiste, a last-minute substitute for the Rollers. Once again, Lloyd’s strategy paid off for the Aviators.

With a 3-2 lead, McHale and Vandeweghe broke Baptiste for the second time in the set when she sent a cross court backhand long at 30-40. With the Aviators leading 4-2, McHale served out the set as Vandeweghe knocked off a backhand volley winner on a deciding 3-3 point.

After winning women’s doubles 5-2, the Aviators and an 18-10 advantage against the Rollers heading into the final set of the match as Harrison took on Sam Querrey of the Rollers in men’s singles.

Looking fresh and rested, Querrey jumped out to a quick start, breaking Harrison in the first and third game of the set for a 4-0 lead. However, Harrison managed to hold serve in the key fifth game when Querrey’s forehand service return landed just past the baseline.

Querrey easily served out the following game to win the set 5-1 in only 19 minutes and send the match to Extended Play with the Aviators leading 19-15.

Despite battling fatigue and the warm weather after playing two sets, Harrison served out the first game of Extended Play to wrap up the victory for San Diego.

After the match, McHale and Harrison spoke about the challenges of getting back on court for the early match against the Rollers after playing late the previous evening.

“It was a really quick turnaround, but I think it actually worked in our favor because we lost such a heartbreaker yesterday. It came down to the wire,” McHale said. “We didn’t have time to overthink that match. Getting back out here this morning…we were ready to go. We wanted to get some revenge.”

“It was a pretty late bedtime (last night) so just turning it around today was tough. Sam’s resume speaks for itself and I always need everything I’ve got to play against Sam. When you’re a little bit fatigued, it just makes it that much more of a task that’s tough to overcome,” said Harrison. “Credit to my teammates… building the lead and a cushion for me because I knew from waking up today that it was going to be a tough one for me.”

The Rollers are now 3-3 on the season.

If you think World TeamTennis is just a glorified exhibition, think again. Every competitor who steps on the court for a WTT match wants to win and more importantly, they don’t want to let their teammates down.

#WTT2020: @CocoVandey and @ChristinaMcHale hold it down in women’s doubles, 5-2, extending the Aviators’ lead to 18-10 with only men’s singles left. Watch the @SDAviators take on the @VegasRollersWTT LIVE NOW on @FacebookWatch and @CBSSports Digital! #LASvsSD #EveryPointCounts pic.twitter.com/bIoKO5ZicD

This was the case last season for the San Diego Aviators. They had just suffered a 22-17 loss to the WTT defending champion Springfield Lasers in the ninth match of the 2019 campaign and their won/loss record for the season stood at just 4-5.

However, Coach John Lloyd rallied the team and the Aviators ran the table, winning their last five consecutive matches of the regular season to finish at 9-5 to clinch a spot in the WTT Playoffs.

As they headed to the Orleans Arena in Las Vegas to meet the Lasers in the semifinals, the Aviators felt they had an excellent chance to advance to the final and reclaim the King Trophy they had won in 2016.

The semifinal match against the Lasers was extremely close as San Diego surged to 19-18 lead late in the match and looked destined to advance to the WTT Finals. However, Springfield staged a furious comeback and ultimately won the match 21-19.

A year later, the heartbreaking semifinal loss to the Lasers is still a difficult one for the Aviators to forget, especially for two members of the team.

“It was devastating. The (last) match was so up-and-down. It looked like we might have been able to cross the line and move into the final, which would have been against New York. We would have fancied our chances in the final,” said Jonny O’Mara. “It was a difficult one. It was very disappointing to not be able to find a way to get the win.”

“That was brutal. The team were devastated afterwards. To be honest, I like to see that. I was devastated too. These were not pro players who were just showing up for a paycheck. This hurt. It was great getting there but losing by that close of a margin, you want to make up for it,” said Coach Lloyd.

According to Lloyd, the season-ending loss in the 2019 semifinals could provide some strong motivation for this year’s Aviators team.
“I know if we get this opportunity again and get to the playoffs, which is going to be tough, I think everyone is going to be raring to go. We’re all on the same page and we want to win this trophy especially this year with the standard being so high. It would be a hell of an achievement for everybody if they could do it,” he said.

The Aviators will play their third match in three days when they meet their Southern California rival, the Orange County Breakers, on Sunday at 5 p.m. (PDT) at The Greenbrier. The match is the second of two matches scheduled against the Breakers this season. Orange County will be the designated Home Team.

J. Fred Sidhu has been the San Diego Aviators Media Relations Manager and Beat Writer since 2017. He has also worked in media relations for the US Open, BNP Paribas Open and various USTA National Championships.